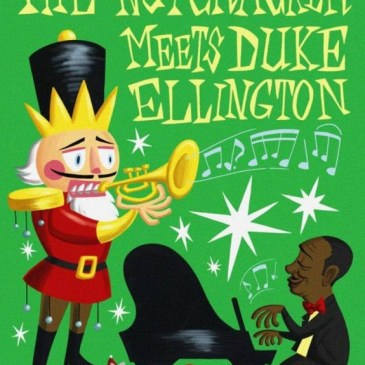 December is just around the corner, and the Saskatoon Symphony Orchestra will be joining forces with the Saskatoon Jazz Orchestra on December 2 to present the music of Tchaikovsky’s Nutcracker Suite and Duke Ellington/Billy Strayhorn’s brilliant re-imagination of the Nutcracker Suite for jazz band.
If you have never heard of Ellington’s version of the Nutcracker, bring up a new tab on your internet browser/enter your YouTube app and look it up. If the Nutcracker is one of your favourite pieces, you’ll love what Ellington and Strayhorn have done with it. The SSO and the SJO have a neat set-up where they will alternate between each movement of the suite to best demonstrate the musical play happening. This concert will also feature a few festive tunes from the SSO and the SJO (including an orchestrated version for both groups of Little Drummer Boy by SJO bandleader Dean McNeill).
If I’ve caught your interest, check out the Saskatoon Symphony’s blog post about the concert:
http://saskatoonsymphony.org/a-one-of-a-kind-nutcracker-night/
I have the privilege of playing alto sax in the SJO for this show. I’ve played the Nutcracker Ellington arrangement before, and I can say that it was one of the most enjoyable concerts I’ve ever played, hands down. If you decide to get a ticket and check it out, you’ll see me putting my doubling skills to work and playing an exotic instrument in one of the movements…:)
To purchase tickets, click here
See you in the concert hall!