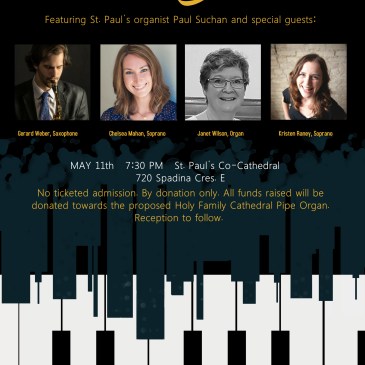 I am excited to share details about an upcoming concert taking place Friday, May 11 at St. Paul’s Cathedral in Saskatoon. This concert is being put on by Paul Suchan in efforts to raise money for the proposed pipe organ at Holy Family Cathedral. The pipe organ, once completed, would have 68 ranks (ranks = ranks of pipes). The largest pipe organ in Saskatoon at Knox United Church currently has 50 ranks, and the new pipe organ at Holy Family would be the largest in Saskatchewan and among the largest in western Canada. The organ would be built by Casavant, which is one of the most well-known and respected organ-building companies in the world. Once the instrument is installed, the church plans to use the space for teaching, workshops, regular church activities. Holy Family would also be a great potential venue for concerts with large ensembles, or a venue for guest organists. The Saskatoon Symphony Orchestra performs Handel’s Messiah and other great Baroque works every year, and performances involving this new instrument would no doubt be spectacular.

This concert offers the opportunity to experience the beautiful pipe organ of St. Paul’s in several different solo and chamber settings. I am looking forward to performing a piece of Gregorian chant with Paul arranged for saxophone and organ. The piece we will be performing is inspired by an album recorded by Norwegian saxophonist Jan Garbarek and the Hilliard Ensemble titled Officium. On the album, the Hilliard Ensemble sings Gregorian chant and composed polyphony of the Medieval period, while Jan Garbarek improvises melodies that at times compliment and at other times conflict . Gregorian chant and jazz saxophone seem like an unusual mix, but the Hilliard Ensemble and Jan Garbarek are able to tap into the essential characteristic of both styles of music in this album: improvisation. I strongly recommend checking Officium out for yourself, and if you enjoy it (or would like to hear what I’m talking about in action), come hear our own rendition on May 11!

I am also looking forward to singing in the choir that Paul and Naomi Suchan have put together for the purpose of this concert. Other special guest artists performing are Chelsea Mahan (voice), Kristen Raney (voice), and Janet Wilson (organ). Admission is by donation and not ticketed – concert starts at 7:30pm, with a reception to follow. The concert will run 60-70 minutes with no intermission. Screens and cameras will be installed to see musicians performing in the choir/organ loft, including a special camera for the organist’s feet!

Hope to see you out for this unique concert and supporting a great musical cause in Saskatoon!