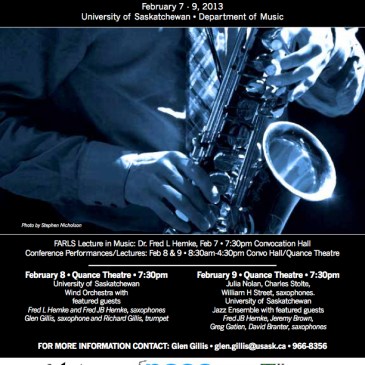 I have some exciting news to share about my latest saxophone project! From March 10-13, I will be attending the North American Saxophone Alliance (NASA) 2016 Biennial Conference at Texas Tech University in Lubbock to premier a composition titled Songs of Ebb and Flow by Canadian composer Paul Suchan.

My first experience at a NASA conference was in 2013 when the University of Saskatchewan hosted the NASA Region IX Conference in Saskatoon (the image for this post is taken from the cover of the conference program). This was an incredible opportunity for my saxophone career, as Frederick Hemke, former professor of saxophone at Northwestern University, was the special guest artist. The North American Saxophone Alliance was first established in 1976 by Dr. Hemke. Not only did I participate in a masterclass with Dr. Hemke, but I also had the privilege of sharing the stage with him with the University of Saskatchewan Wind Orchestra. What a terrific experience it was to learn from one of the founding members of NASA and one of the greatest master teachers of the saxophone!

The NASA Biennial Conference is one of the best events in the world for professional, student, and amateur saxophonists to attend. In order to obtain a performing slot, you first need to be a member of NASA and send in an application generally 4-6 months ahead of time. NASA elects a program selection committee to review proposals and listen to samples of the applicant’s most recent playing. The committee schedules dozens of presentations involving hundreds of performers.

My saxophone proposal was accepted and I will be performing two new compositions by Saskatchewan composer Paul Suchan. The first piece is titled Danse Exotique des Gros Papillons (Exotic Dance of Giant Butterflies) and was originally written for soprano saxophone and piano in 2014 and commissioned by one of my saxophone mentors, Dr. Glen Gillis. Since then, Mr. Suchan has arranged the piece for violin and piano and has arranged it for alto saxophone upon my request. The second piece is titled Songs of Ebb and Flow and draws inspiration from the Métis fiddle music archived at the Ebb and Flow First Nation of Manitoba. I commissioned Mr. Suchan specifically to write this piece for me to perform at the NASA Biennial Conference.

A large portion of the performances that take place at NASA are world premieres of new works by living composers. This is one of the best venues to premiere new works for the saxophone. One of my favourite pieces to perform, New Stories by Dorothy Chang, was premiered at the NASA Biennial in 2013 by Joseph Lulloff, professor at Michigan State University. I was in attendance for this performance and I decided immediately that I had to get my hands on this piece and play it! NASA works somewhat like a testing ground for new compositions in this way so that other saxophonists can transmit these works to new audiences. The NASA Biennial is mostly attended by American saxophonists, so my attendance as a Canadian saxophonist sharing new works by a Canadian composer is highly relevant for not only Canada, but especially Saskatchewan artistry and aboriginal heritage and culture expressed in Mr. Suchan’s Songs of Ebb and Flow.

Well over one thousand student and professional saxophonists attended the last conference held at the University of Illinois! The evening showcase concerts were the greatest highlight for me. I had a chance to hear saxophone legends Frederick Hemke and Eugene Rousseau in the first night, and this year will be just as promising: Kenneth Tse from the University of Iowa and Claude Delangle from the Paris Conservatory are on the program, not to mention Dr. Hemke and Dr. Rousseau.

I’m most looking forward to performing, of course, but I’m also excited to reconnect with many of my friends and colleagues that I met while studying at the University of Florida and through previous NASA conferences. One of the most important objectives of these conferences is to bring together saxophonists from around North America and the world and foster new artistic collaborations. I’ve met so many amazing musicians at the NASA conferences and I look forward to hearing their latest projects.

If you would like to have a sneak peak of Paul Suchan’s pieces, I will be having a recital on March 8 at 7:30pm at the Saskatoon Symphony Orchestra office (408 20th Street W) to “test drive” these works. This recital will feature Saskatoon-based pianist Sofia Mycyk and saxophonist/music educator (and future wife!) Sarah Suchan. Stay tuned for more details on this recital!

For more information on NASA (not the space organization!) and the conference, click here